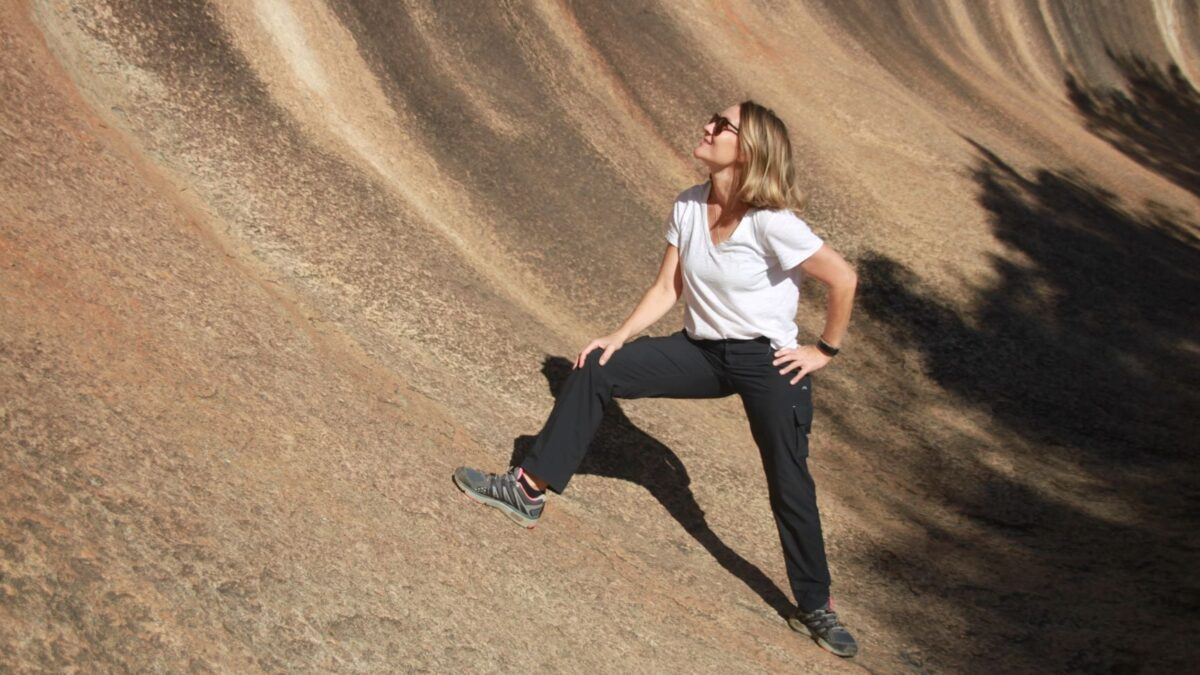 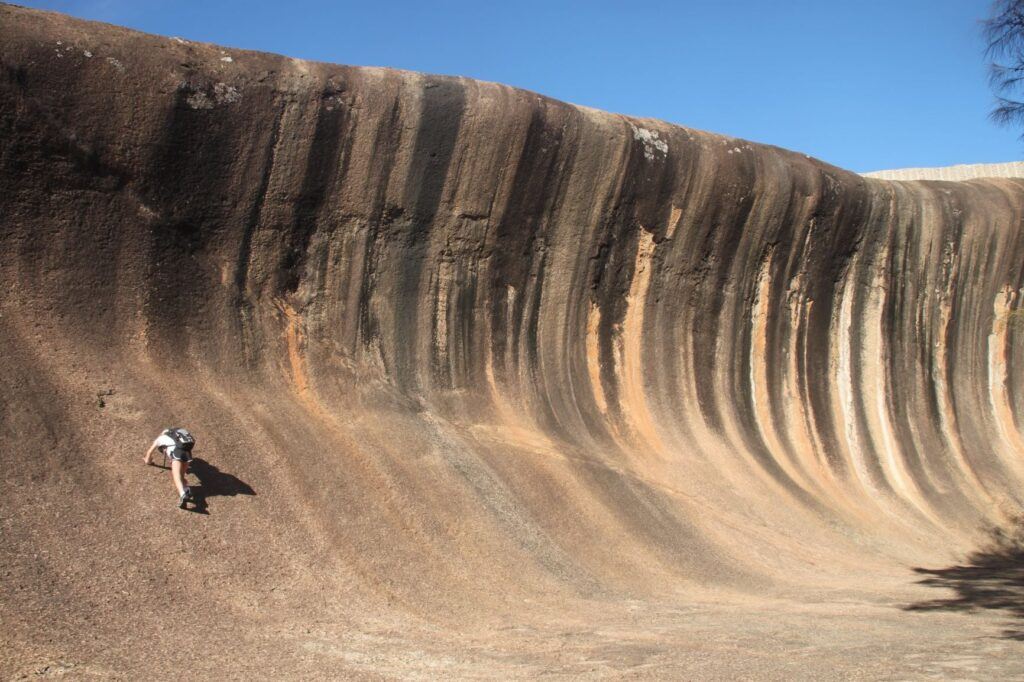 From Mount Augustus – the biggest rock in the world, to the lunar-like landscape of the Pinnacles, it’s safe to say that West Australia has some pretty impressive rocks. Wave Rock however, which resembles a gigantic, breaking wave may well be the most wondrous geological formation in Western Australia.

Also known as Katter Kich by the Noongar people, the area is of deep significance to the local Aboriginal people and makes for a wonderful way to explore the ancient landscape of Western Australia’s golden outback.

Where is Wave Rock located in Australia

Wave Rock is about 350 km east of Perth near the town of Hyden on the edges of the Wheatbelt Region in Western Australia.

The drive from Perth to Wave Rock is just under four hours and offers a great way to see some of the smaller farming communities in the Wheatbelt.

The most direct way from Perth to Wave Rock is via York, Quairading, Corrigin and Hyden. Alternative routes are via Kulin which offers a chance to drive along the Tin Horse Highway. Visit Pathways to Wave Rock for the best travel routes and ideas of things to do along the way.

How was Wave Rock formed 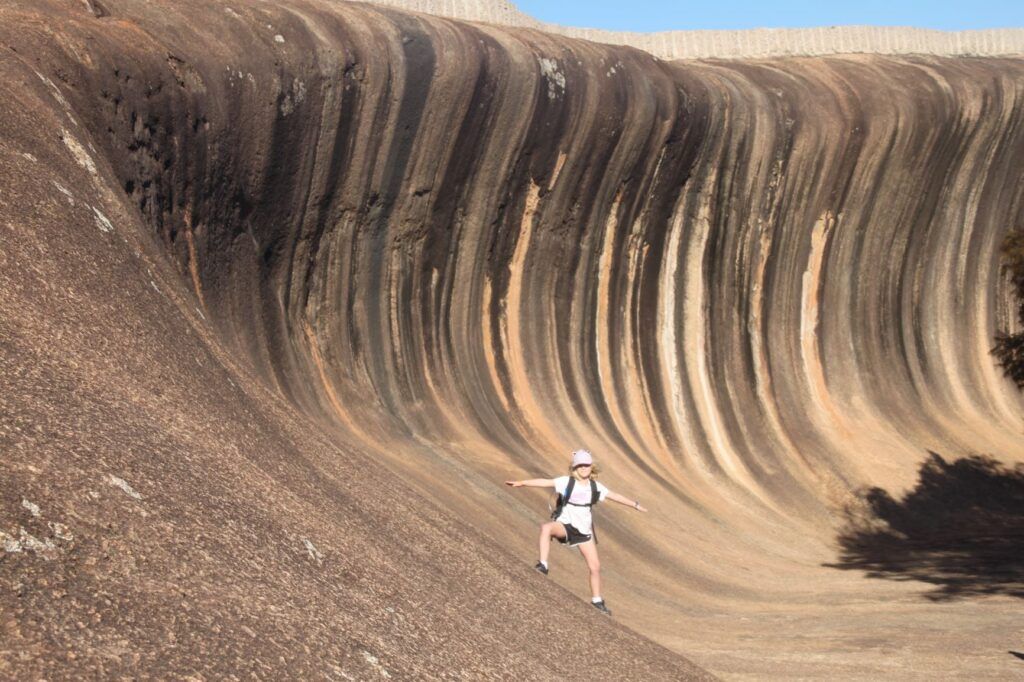 Wave Rock was formed underground over 2.5 billion years ago when it was part of a much larger rock mass. Without earthquakes and volcanoes to disrupt this massive rock mass, it was up left up to the process of weathering and erosion to slowly expose the top layer of the rock about 60 million years ago.

Subsequently, when rain fell on this exposed part of the rock, the rainwater trickled down the side of the rockface and seeped underground. Here, the chemicals in the rainwater started to wear away at the rock and shape it into the unique formation we know today.

The chemicals in the rainwater created the unique reddish and white stripes on the rock. While the black lines are from a type of algae.

Things to do at Wave Rock, Australia

If you’re going to Wave Rock, it’s well worth taking the extra time to explore some of the other natural attractions in the vicinity.

Tips for a Perth to Wave Rock Trip

A trip to Wave Rock is a fantastic experience anytime of the year. However, spring time will show of the landscape to its best advantage.  If you visit in the cooler winter months between June-August expect some very chilli mornings. By contrast, the summer months can be very hot.

Bring your own supplies. Once you arrive at Wave Rock there are very few shopping options. The caravan park has a small general store with essential supplies, but for anything else you will need to head back to Hyden.

Well behaved dogs on a leash can be taken on all walk trails around the rock.

Take a trip along the Tin Horse Highway. The fun starts near the town of Kulin on your way from Wave Rock to Perth.

Wave Rock Caravan Park – the caravan park is the closest place to stay near Wave Rock and is directly adjacent to the rock. This means that you can literally walk to Wave Rock from your accommodation. The caravan park has facilities for caravans and campers. The park also has a good selection of self-contained cabins that are clean and well equipped.

Wave Rock Motel – The motel is located in the town of Hyden about 5km from Wave Rock. The advantage of staying in Hyden is that you have access to a small supermarket and the pub for dinner. The disadvantage is that you are not in direct vicinity of Wave Rock and the surrounding attractions like Hippo’s Yawn and Lake Magic which are in walking distance from the caravan park.

Wave Rock Resort – the resort is located 1.5km from Wave Rock. It’s located on the edge of Lake Magic and offers two-bedroom self contained villas

Tours to Wave Rock are available from Perth and are a good idea if you don’t have your own car or don’t want to drive long hours.

Most of the Wave Rock Tours are offered as a day trip and leave Perth early in the morning. The tours to Wave Rock usually include a stop in the historic town of York.

Entry fee to Wave Rock is $15 per vehicle.