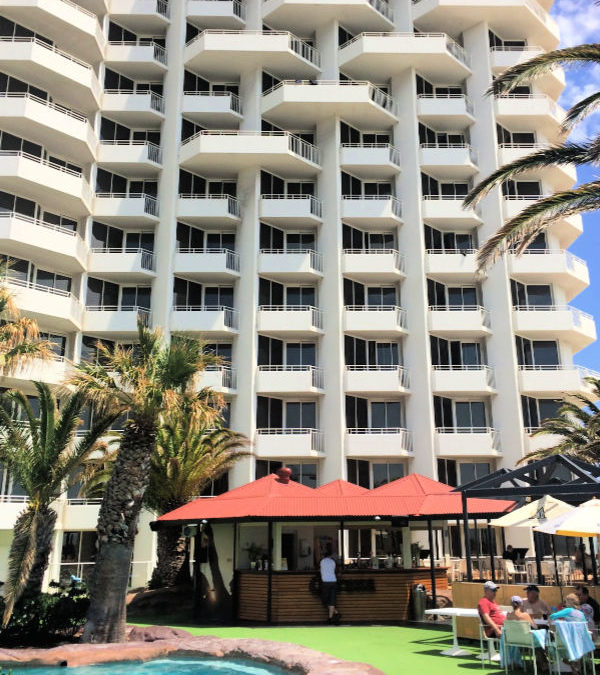 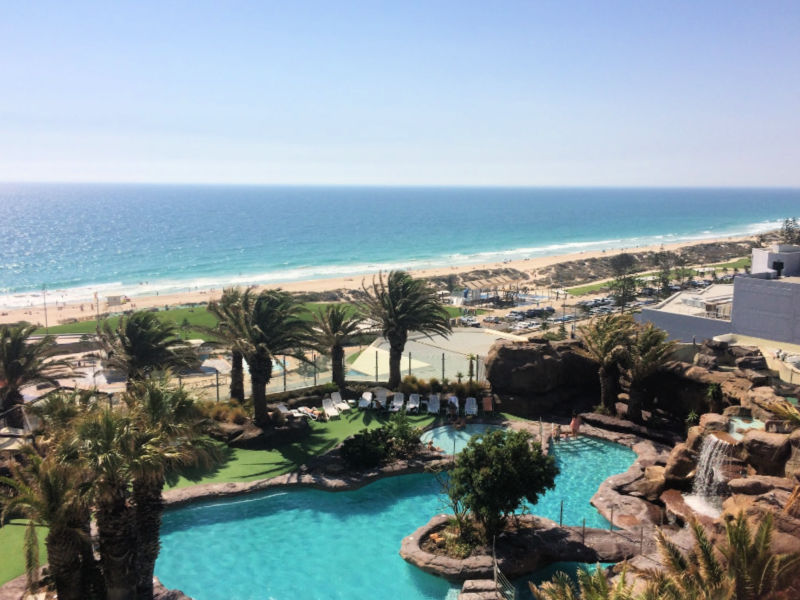 Whether you’re a local searching for a Perth staycation or a visitor on your first trip to Perth, then the Rendezvous Hotel is definitely one of the best places to soak up the holiday vibes.

Built-in 1986 during West Australia’s boomtime, the Rendezvous hotel epitomises the kitschy glamour of Perth in the 1980s. First called Observation City Scarborough, the hotel was financed by former tycoon Alan Bond tp capitalise on the influx of tourists for the 1986 America’s Cup yacht race.

The construction of the hotel wasn’t without controversy. There were allegations of corruption and bribery involving the local government. Furthermore, many locals were opposed to the building of a 25-story hotel and were worried that Perth’s pristine coastline would become another Gold Coast with ritzy high risers hugging the beaches. These sentiments even led to the detonation of a bomb under one of the cranes to stop the hotel from being built. No one was hurt in the explosion and the perpetrators were never caught. Love it or hate it, the hotel did get built.

Back in the day, Observation City was the hotel of choice for many of the stars and celebrities visiting Perth. U2, Robbie Willians and even Michael Jackson have stayed at the iconic hotel. The Grand Piano that Jackson played on still sits in the hotel lobby.

With the end of WAs boom times and Alan Bond’s imprisonment for fraud along with many other Perth financial high rollers, the glitzy hotel too started to fade and lose its shine. For a while, it resembled a washed-up celebrity whose heyday had long come and gone.

However, in 2015 with new ownership, the hotel received a multi-million dollar makeover that included a well-needed new coat of paint, facility upgrades and refurbishment.

The hotel may still be a testament to the 1980s but she still remains the grand old dame of Scarborough beach.

Why stay at the Rendezvous Hotel Scarborough 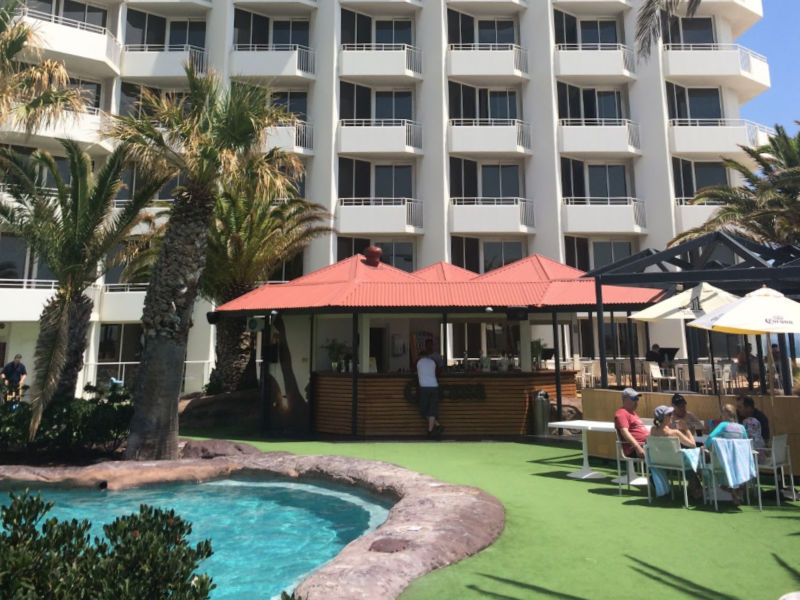 If you’re after a Perth holiday or a quick getaway, then the Rendezvous Hotel in Scarborough is one of the best Perth accommodation options.

Firstly, the beachfront location makes it one of the best and most convenient places to stay in Perth. Along with the stunning beach, the newly revamped Scarborough esplanade offers all amenities within walking distance including several eating and drinking options, supermarket, nightlife and the stunning Scarborough sunset markets on Thursday night.

Scarborough is also one of Perth’s few coastal suburbs where you don’t have to rely too much on a car with reasonable public transport options available. Scarborough is centrally located and within 15 minutes from the city by car and 25 minutes from Perth airport. 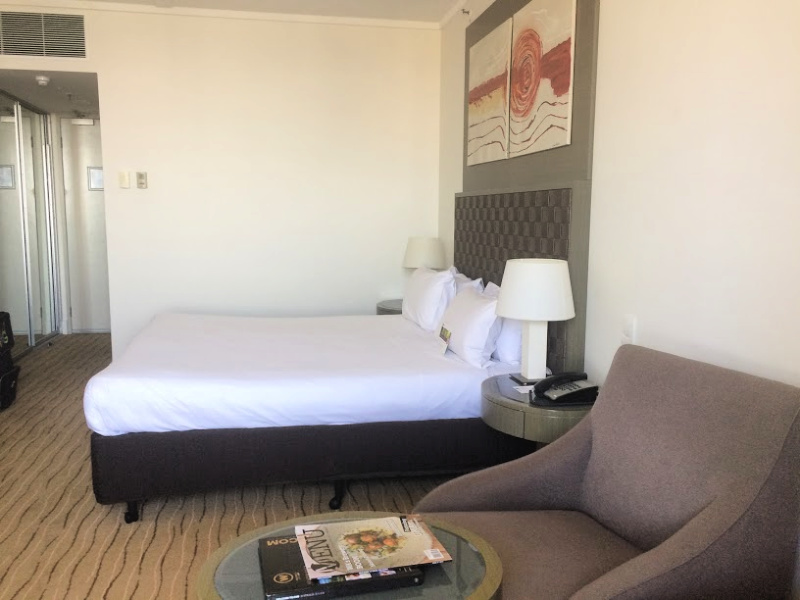 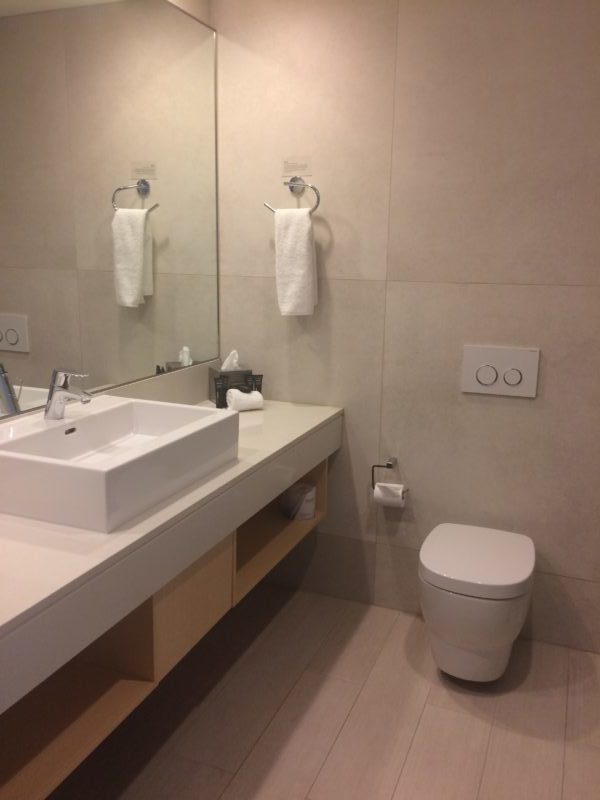 The rooms at the Rendezvous range from the standard Guest Room King to the Deluxe Suite. There are also family rooms and Executive Suites.

Most of the rooms at the Rendezvous Hotel have ocean views and private balcony. If you’re going for the standard king rooms, the best ocean views are above level 12. I also recommend rooms facing northwest as you get great views of the coastline and shelter from the southerly winds.

Some rooms on level 10 are on the same level as the pool deck. These rooms have limited views of the ocean and a terrace rather than a balcony. Depending on personal preferences, this may be an advantage or disadvantage.

There are lots of comments on hotel review sites about the rooms being outdated and old. However, we found our room to be modern, clean and spacious. We had a good-sized TV, coffee and tea making facilities and mini-bar. The bathroom was new and clean with a good shower and complimentary toiletries.

The rooms don’t have a wow-factor like some of the modern new boutique hotels but overall, they are consistent with the pricing of the hotel. The main critique in our experience was that our so-called king size bed was two single beds pushed together as one.

For the most part, rooms are reasonably priced (at least for Perth standards) and there are some good deals in during non-peak times. See hotel pricing and availability here.

The pool at the Scarborough Rendezvous Hotel 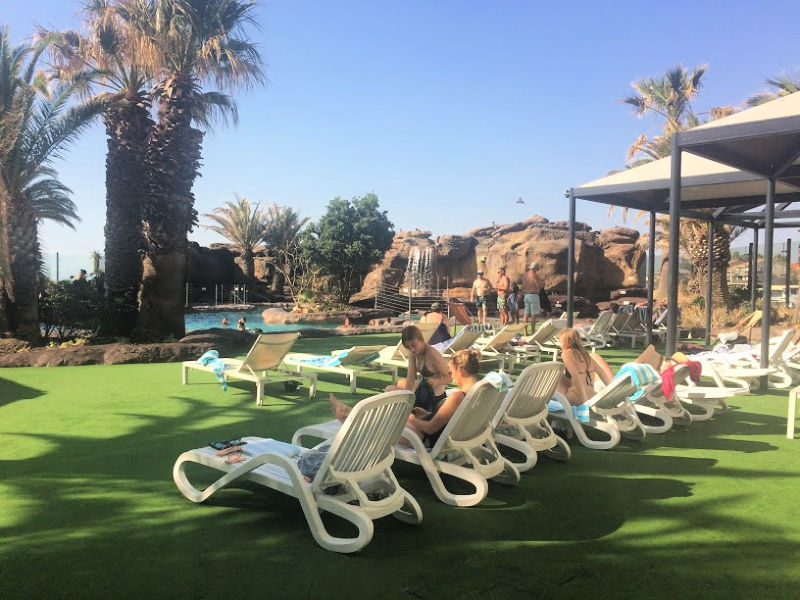 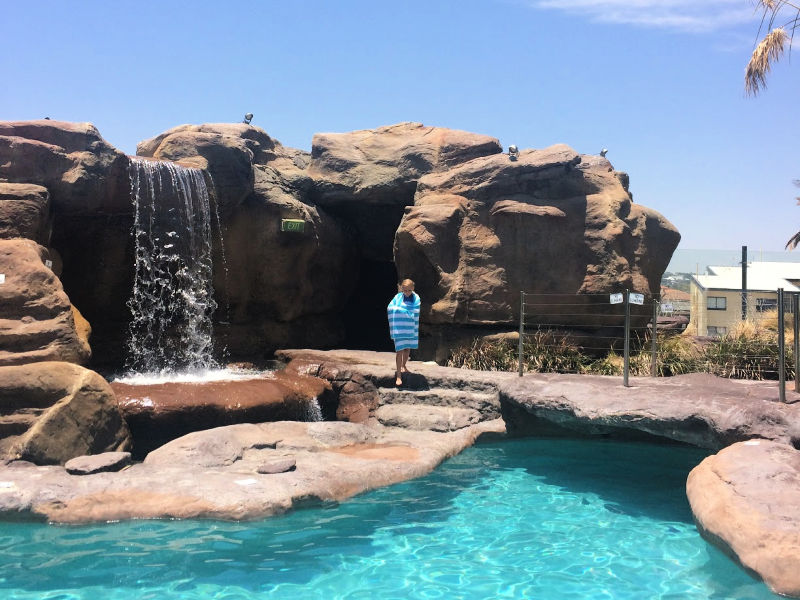 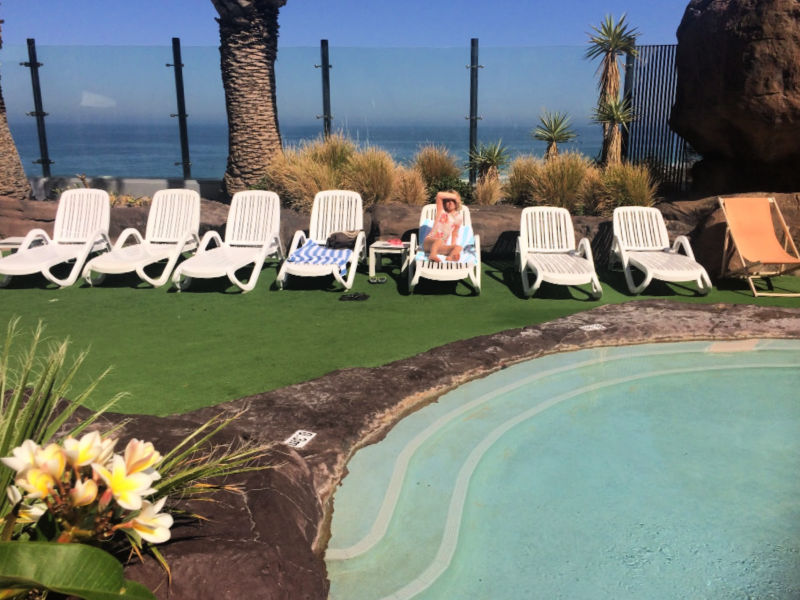 The lagoon-style pool area was by far our favourite thing about the Rendezvous hotel in Scarborough. It was a great place to relax for a day and soak up the holiday vibes. The pool area includes a shallow pool for smaller kids as well as a separate jacuzzi.

The pool area also includes the Cascade Pool Bar. The bar is open from mid-morning to evenings and offers casual dining options. There’s a deck area with ocean views or food can be ordered to your lounge chair next to the pool. Drink prices though do err on the pricier side.

Restaurants and cafes at Rendezvous Hotel

The hotel has an onsite restaurant as well as room service options.

The Straits Cafe is located at lobby level with views overlooking Scarborough Esplanade and the ocean. The restaurant offers a breakfast buffet, as well as lunch and dinner options.

On the street level, Scarborough Esplanade has a range of eating and drinking options. These range from restaurants to more casual eateries, cafe, ice cream parlours, pubs and bars. There are many good dining specials on during the weeknights that have very reasonably priced dining options. There’s also a Coles supermarket located at the Luna Shopping Centre.

Other facilities at the Rendezvous Hotel

The Rendezvous Hotel offers many facilities that you can expect from a modern hotel. Along with the swimming pool, there is a gym, games room with arcade games, two tennis courts and conference facilities.

The hotel has a very friendly and helpful concierge service. The Concierge can help with tours, car rentals and transfers to and from the airport. 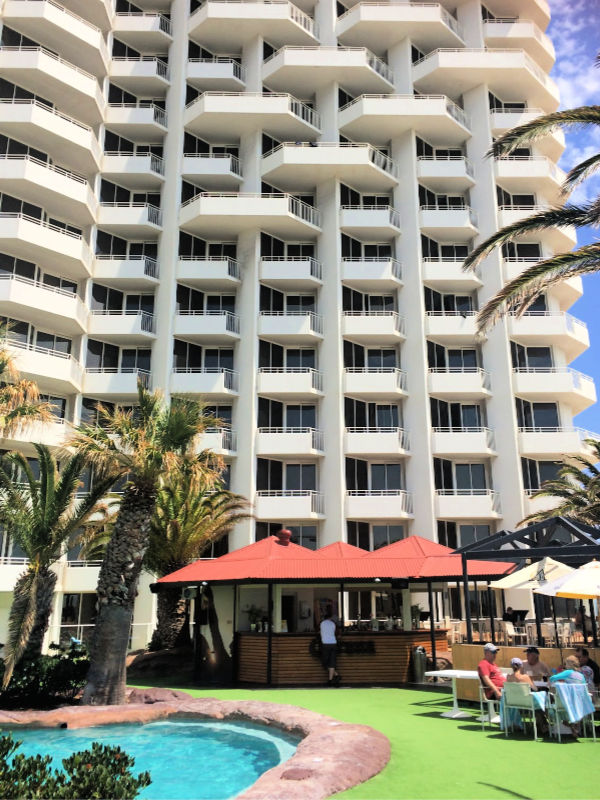 Bookings and other details 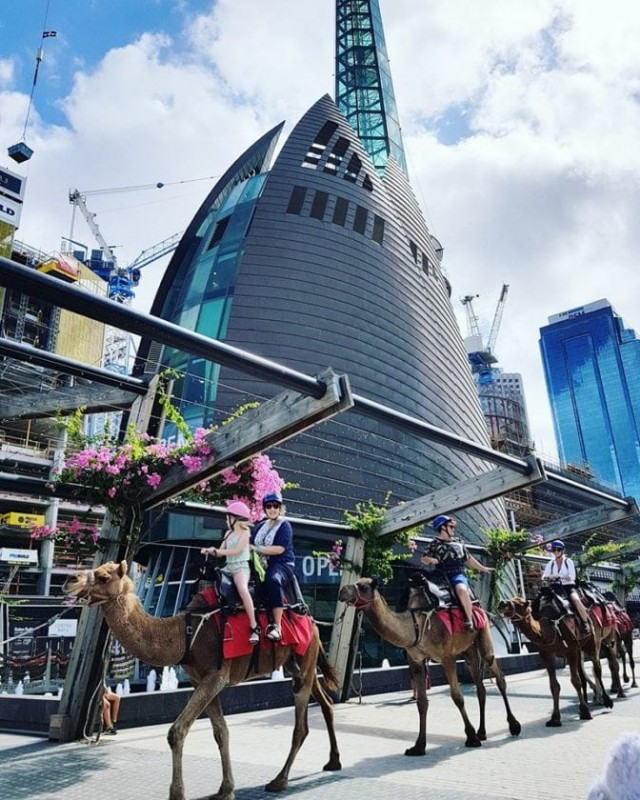 A local’s guide to things to do in Perth 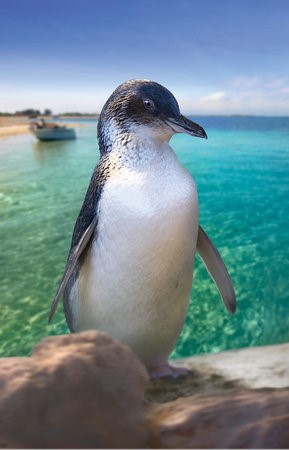 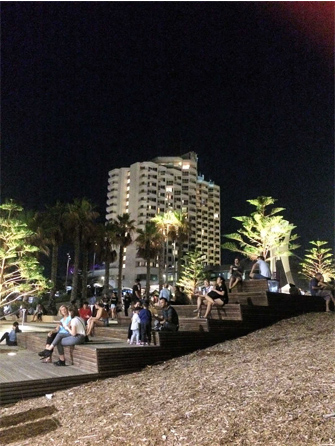