Things to do in Kings Park Perth

Things to do in Kings Park Perth 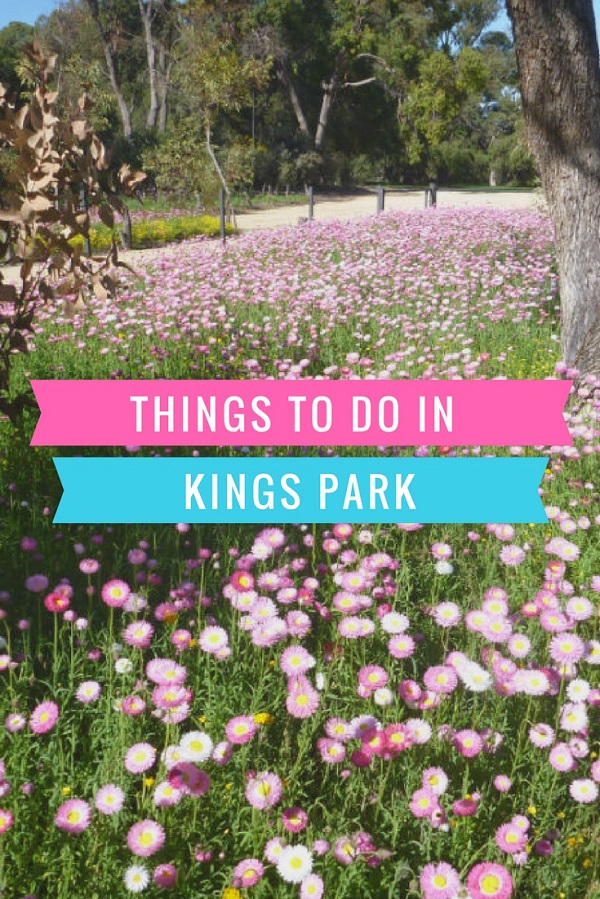 Perched atop Mount Eliza, Kings Park is Perth’s most iconic landmark. Along with being the city’s most photogenic location, there are plenty of other things to do in Kings Park. 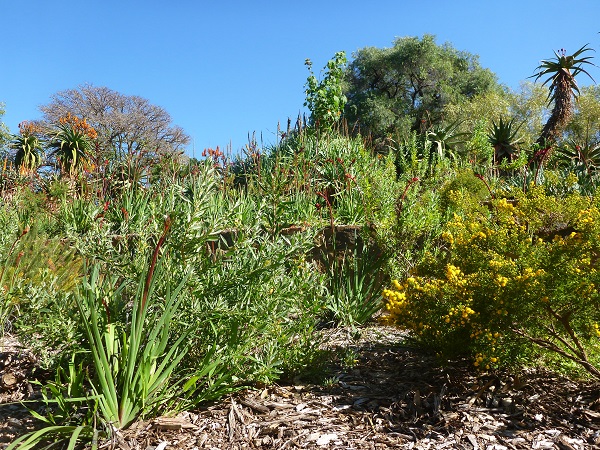 Take a wander around the entire state of West Australia at the Kings Park Botanic Gardens. Western Australia is known for its unique range of flora and fauna and this can be appreciated at the Botanic Garden which has a display of over 3000 species of plants.

Amazingly,  half of these plants are not found anywhere else in the world. The garden beds represent each geographic region of West Australia, including the Pilbara, Southwest, Rottnest and the Kimberley.

One of the highlights is the 750-year-old Boab Tree at Kings Park. Named  “Gija Jumulu’. the boab had to be removed from its original home in the Kimberley to make room for roadworks and was gifted to all West Australians by the Gija People, the traditional landowners in the east Kimberley.

The boab was transported 3200km to its new home in Kings Park in 2008, which involved a massive logistics operation. This included raising power lines, pruning trees and redirecting traffic to ensure that the massive boab could pass through Perth’s narrow streets.

For more spots in West Australia for flower lovers, check out this post here. 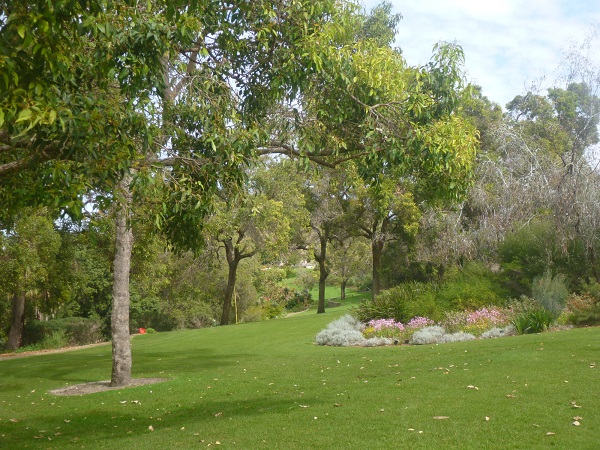 The best way to enjoy Kings Park is to walk, jog or bike along the many paths and bush tracks that are located throughout the park. Maps and brochures can be collected from the Visitors Centre.

Enjoy a free-guided tour run by the lovely volunteers of Kings Park.  Tours leave daily at 10am and 12pm with an additional tour at 2pm between July to October.  The tours cover various aspects of the park such as the Perth Botanic Garden, War Memorial and Monuments and Wilderness and Wildflowers. The walks start at the opposite of Aspects Gallery Shop on Fraser Avenue.

If you prefer to go it alone, follow one of many self-guided walks which are on offer in Kings Park. The Bushland Nature Trail and the Law Walk can both be accessed near the War Memorial Precinct take in some of Perth’s best views and give valuable insight into Australia’s unique biodiversity. You’ll come across plenty of native birds and West Australia’s famed Tuart, Marri and Jarrah trees. 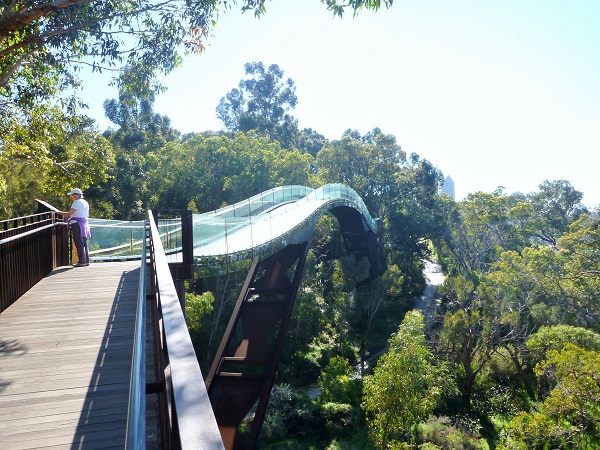 Enjoy a bird’s eye view along the 620 metre Kings Park treetop walk which boasts superb views of West Australia’s native trees including the Jarrah, Tingle and Marri Trees as well as panoramic views of the Swan and Canning Rivers.

The Federation walk gives an insight of the significance of the site to the traditional Noongar people and evokes the journey of the dreamtime serpent, the Wagyl who is said to have emerged at the foot of Mt Eliza to create the beautiful Swan River. 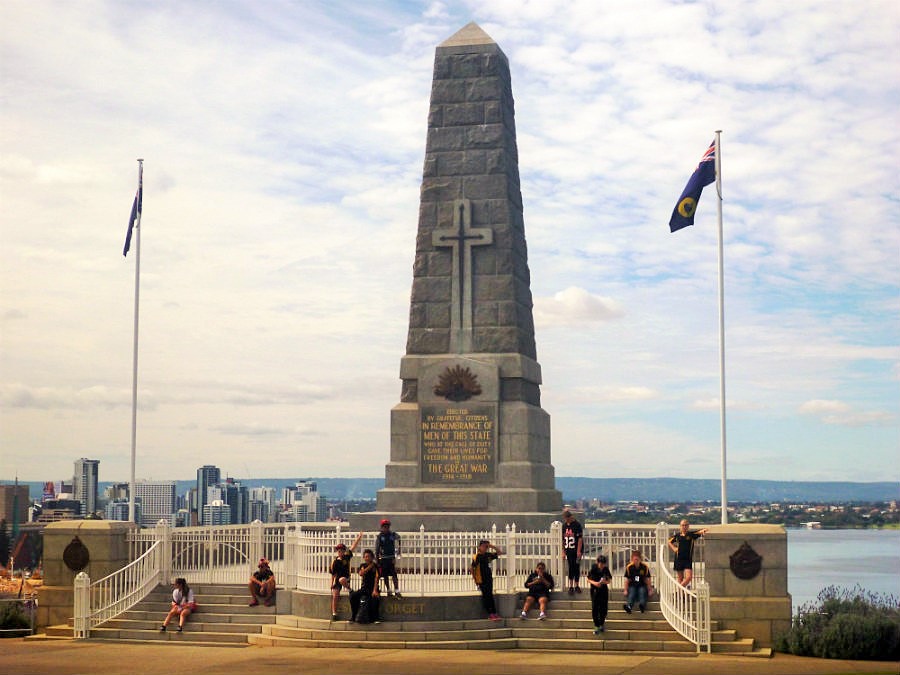 Kings Park is home to many war memorials and statues which can be found throughout the park.

The most noticeable is the West Australian State War Memorial Precinct along Fraser Avenue. This comprises the Cenotaph, Court of Contemplation, Flame of Remembrance and Pool of Reflection and is a moving tribute to Australia’s fallen soldiers.

The Flame of Remembrance was inaugurated by Queen Elizabeth II on 1 April 2000 and burns continuously and symbolises the promise of all Western Australians: “We will remember them”.

The names of Australians fallen soldiers are inscribed on the walls inside the undercroft and on the bronze walls on the outside.

Don’t miss the Whispering Wall, located above the burning flame memorial. Kids love whispering into the wall, which is audible to another person sitting at the other end.

Most recently, a memorial was erected for the victims of the Bali bombings in 2002. Also keep an eye out for the statue of John Forest, West Australia’s first Premier and a statue of Queen Victoria.

The trees lining the Honour Avenues throughout Kings Park serve as a dedication to individual Service personnel who gave their lives while serving their countries in time of war.

At the base of each tree along these avenues, is a plaque inscribed with the name of the deceased, age, date and manner of death and who dedicated the plaque.

Kings Park is rich with aboriginal culture and has been a place of worship to the local Widuk people for thousands of years.

You can also follow the Boodja Gnarning Walk which explains the connection between the Noongar people and Kings Park. The walk starts at the entry of the Botanic Garden.

Also be sure to stop at the Kings Park Aboriginal Art Gallery. This is located on Fraser Avenue underneath the Kaarta Garup Lookout. 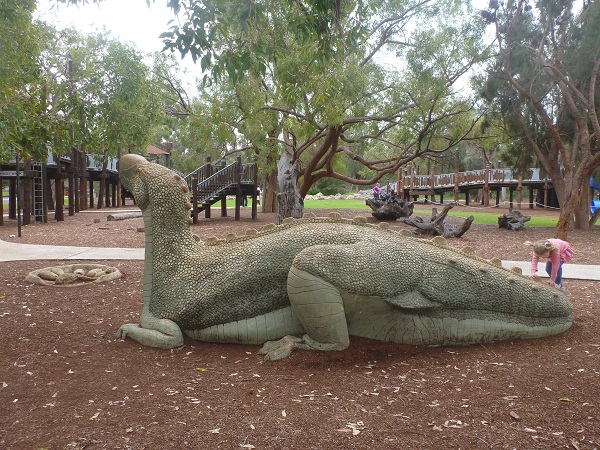 Kings Park has some of Perth’s best playgrounds that cater for both younger and older kids.

Synergy Parkland in Kings Park is nestled inside the park and has luscious lawns and a pond.   Here kids can climb giant prehistoric animals and play on the island fort or get wet at the water park. The gorgeous Zamia Cafe is adjacent to the playground and a good spot for a coffee or lunch break.

One of the most popular spots for families at Kings Park especially, with smaller kids is the Lotterywest Playground. You’ll also find the Stickybeak Café, a large oval and extensive picnic areas with gazebos.

Saw Avenue Picnic Area and Playground near Subiaco Road include a fort, climbing logs, tunnel as well as picnic and barbeque areas.

Older kids will love the nature playground at the Rio Tinto Naturescape. This area was designed to keep as much of the natural bush elements as possible.  It lets children to find their own fun by exploring, climbing rocks, crossing creeks, building cubby houses and getting grubby.